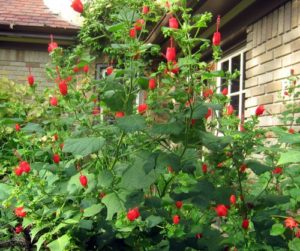 The Turk’s Cap plant is native to southeastern U.S. and parts of Mexico. Named for the shape of its small flower, which resembles the traditional Turkish hat, Turk’s cap is related to the hibiscus plant and is sometimes called the sleeping hibiscus because its petals never fully open. Suitable for U.S. Department of Agriculture plant hardiness zones 7 through 10, Turk’s cap is a versatile plant that only needs ordinary care to flourish.

The Turk’s cap plant grows as a bushy, 8- to 9-foot-tall shrub that also does well when pruned to one or two stems to develop as a small tree. A woody to semi-woody plant, it has large, slightly fuzzy leaves and, when unpruned, many spreading stems. It blooms from May through November, with new flowers opening daily. The flowers have petals that wrap around each other, with long stamens and pistils that extend well beyond the petals. Turk’s cap flowers attract butterflies, hummingbirds and moths. Its fruits resemble small red cherries and attract birds and other wildlife. The fruits ripen in fall, splitting into five segments, each with one seed.