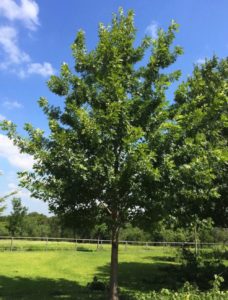 Texas Red Oak is a medium to small tree, rarely growing over 75 feet, but usually 30 to 50 feet, with spreading branches. It is found on alkaline limestone and neutral to slightly acid gravels and sands of north central and central Texas west to the Pecos River.

Along the White Rock Escarpment through Dallas to San Antonio there are hybrids of Texas Red Oak and Shumard Red Oak, Q. shumardii – the pure Texas Red Oaks exist to the west. Texas Red Oak is smaller, more often multi-trunked, and more drought tolerant than Shumard Red Oak. The foliage turns bright shades of vivid red and orange in autumn.

The bark is dark gray to black with plate-like scales, although sometimes it is light gray and smooth.

Interesting Facts: The spread of oak wilt disease in Central Texas can often be linked to the movement of firewood from infected red oaks. These trees produce “fungal mats” under the bark where certain insects feed; it is these insects that can infect new trees where the firewood has been moved. If you live in an area with active oak wilt, or your neighbors have trees with oak wilt, you would be better served by planting alternative oak species, such as Lacey Oak or Monterrey Oak.